First, let me explain that the Vikings were not solely interested in England, they traded and explored throughout the then known world, their destinations eventually included places as far afield as Constantinople (Istanbul) and even the east coast of Canada and North America via Iceland and Greenland. However, there were a number of reasons which prompted them to adopt a violent approach to their travels, including one key event for which I need to take you back to when Charlemagne (Charles the Great) ruled the all-powerful Frankish Empire which dominated Europe at that time.

It was a very powerful empire and, as a devout Christian, Charlemagne saw it as his duty to convert the pagans in Europe to Christianity. To achieve this, he rounded up 4500 pagan prisoners in 782 and forced them to be baptised. When they did, he promptly beheaded each and every one of them! As you can imagine, this brutal act sent shock waves through the pagan communities, especially those in what we now think of as Scandinavia. This may have persuaded the pagan Vikings to see Christian lands and monasteries as a legitimate target and the first (recorded) of what were to become frequent raids was carried out in England on a monastery at Lindisfarne in 793 – accompanied by much bloodshed and extraordinary violence. 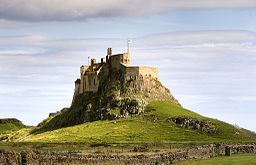 If retaliation was one of the motives for this savage attack on a Christian land, it was facilitated by a number of other important factors, not least of which was better ship building technology which produced the infamous Viking Longship.

These fast, stable craft were ideally suited to the purpose of raiding. They could sail at close to 15 knots and could be beached and relaunched quickly without being dependent on the tides. Having a shallow draught meant they could also sail up rivers enabling them to strike deep inland and their construction was such that it allowed the hull to ‘flex’ so as to handle very rough seas, opening up the prospect of winter raids despite the severe storms at that time of year. 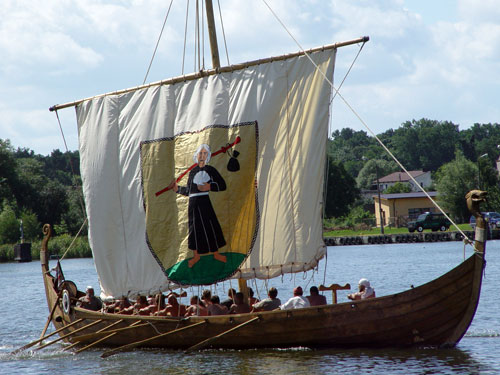 There were actually various different sizes and designs of longships, each fulfilling a specific role and, whilst the English ships would not have looked very different, they were initially no match for these technologically advanced vessels manned by an experienced Viking crew. From what we can tell, owning a longship was often a community affair. If so, the crew would all be well known to each other and worked very much as a team with a common objective.

Given the long history of trading with English settlements, in all probability they may well have established some ‘safe ports’ where they could rest after an arduous journey across the North Sea and then take on supplies and fresh water before embarking on their raids. This might sound something of a betrayal by the Saxon settlements involved but it is conceivable – particularly given that there were still trading ties between the Saxons and the Vikings going back many generations.

Apart from the advances in technology, the raids may also have been encouraged by a shortage of viable farmland, not to mention the prospect of substantial booty from what must have seemed like ‘soft targets’ in the rich but unguarded churches and monasteries in England. Alcuin, a monk, commented thus:-

In fact, ‘visits’ from the so called ‘Vikings’ were probably nothing new – as I’ve said, trading with Scandinavia had been long established – but the violence which now accompanied them came as a terrible shock which must have resounded through the religious communities and which they saw as evidence that they needed to be better Christians. But were the Vikings really just blood crazed heathens intent on vengeance? I suspect not. They were certainly violent and committed some fearful atrocities but it was a violent time and as like as not they were no worse than anyone else. Yet, to the peace-loving monks whose job it was to record these events, they must have seemed very terrible indeed, something which may well have prejudiced the Vikings’ reputation.

Having got the taste for some ‘easy pickings’ of plunder and slaves, (slaves being a valuable commodity in those days) the violent raids continued until, in 865, everything changed. No longer content to simply raid, the Vikings determined to conquer England for themselves. This resulted in a full-scale invasion from a largely Danish force (the Great Heathen Horde) which quickly secured most of the kingdoms which made up England at that time leaving just one – the Kingdom of Wessex to stand alone.

As discussed in Part One of this series, there followed a period of fiercely fought battles, bloodthirsty raids and terrible destruction. Eventually Alfred, by then King of Wessex, secured an astounding victory, though it remains one that few people have ever heard of. Part four of the series looks at this in more detail as the story of these turbulent times continues.

4 thoughts on “Alfred and the Vikings: Part 3: Why did the Vikings first invade England?”