You might be surprised to learn that the so called ‘Vikings’ were not a people at all – the word ‘Viking’ is a verb which means to go off in search of adventure and to explore, though no doubt raiding or at least foraging as they went.
There were actually three main ‘groups’ which have all become lumped together as ‘The Vikings’.
The Danish Vikings were probably the largest group and formed the main part of the force which invaded England in 865. There was also the Norwegian Vikings who actually sailed as far as the eastern coast of Canada and North America (via Iceland and Greenland), and even briefly established settlements there. The rest were the ‘East Facing Vikings’ from Sweden and the Baltic regions who travelled extensively – using rivers and dragging their boats across land if necessary, and even reaching as far as what is now St Petersburg and the cosmopolitan city of Constantinople (now Istanbul).

In reality they may not have fitted quite so easily into these rather neat categorisations and there would have been some overlap both in terms of their objectives and achievements. Also, their numbers would have included mercenaries and probably slaves but there were certain ‘traits’ which were common to all. For one thing, they all travelled and traded extensively – a grave discovered in Scandinavia revealed a rich array of surprisingly exotic ‘grave goods’, including a small statue of a Buddha suggesting trading links with some very distant lands and cultures.

Also, it would be wrong to think of them as people who had nothing better to do than raid, rape and pillage. They included extremely skilled craftsmen who produced some superb work, poets, storytellers and astute traders, not to mention expert sailors and navigators as well. They were lured to Britain not only by the prospect of plunder and slaves but also came in search of land they could farm, that being a scarce resource in many parts of Scandinavia. This is perhaps what Alfred had in mind when, having secured victory at Ethandune (Edington), he ceded areas of land to the Vikings so long as they didn’t trouble him again – land which became subject to the so called ‘Danelaw’ – basically that north of a line drawn from London to Chester. Much of this was already under Viking control but, even so, it was probably not a popular act at the time – giving back land they’d fought for to the very people who’d taken it from them in the first place! Yet it proved how wise Alfred could be, for it meant that many Vikings eventually gave up a life of raiding and integrated themselves into the Saxon communities, traces of which are evident even today not only in our language but in our place names and, of course, in the DNA of many people.

None of this should diminish the image of battle-hardened warriors who carried out some brutal attacks on the fat, undefended monasteries and, of course, on many settlements and farmsteads as well given that they needed to live off the land as they went, often with much violence and bloodshed. But these were brutal times – war was conducted very much up close and personal. It was also a very dangerous occupation because even minor wounds received whilst fighting might well become infected and therefore cause an agonising death sometime later. 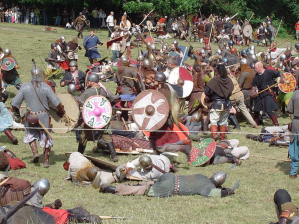 Vikings fighting (part of a festival). Photo taken in August 2005 in Denmark by Tone

For the Vikings their chief tactic when attacking a monastery or a settlement seems to have been a lightening ‘hit and run’ raid, no doubt sometimes even on horseback (the horses having presumably been stolen). However, when it came to a battle both sides tended to fight on foot, often with one side forming a defensive shield wall which, if breached, would result in fearsome hand to hand combat. This involved the use of an array of very brutal weapons including axes, arrows, spears and swords, plus any number of projectiles. The ferocity of the Viking warriors was no doubt fuelled by their belief that only if they died in battle could they earn their place in Valhalla – the Great Hall of Dead Warriors.

To this end I must also mention the Berserkers. These feature strongly in my novel, Blood & Destiny, as warriors who would razz themselves up into such a frenzy that they had no fear of death or dying. They reputedly stripped off their mail vests and drew heathen symbols on their bare chests, having possibly imbibed some sort of halogenic drug, making them an almost impossible foe. If you’ve ever seen the Lewis chess set in the British Museum or one of the many replicas you may have noticed that one of the pieces is shown chewing the edge of his shield which is thought to depict a berserker. In Blood & Destiny I have regarded them as a cohesive and specialist military unit and I think that is the generally accepted position but I do wonder whether in fact they were just individual warriors who chose to prepare themselves for battle in that way hoping to secure a larger share of any booty by fighting like maniacs – hence the term ‘to go beserk’.

Part 3: Why did the Vikings first invade England?

2 thoughts on “Alfred and the Vikings: Part 2 – Who were the dreaded Vikings?”