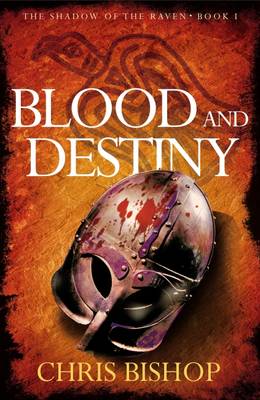 In 878, with most of his army destroyed following a surprise attack by the Vikings at Chippenham, King Alfred of Wessex was forced to retreat to the desolate marshes at Athelney. Whilst few believed he could ever hope to restore his kingdom, he remained determined – no matter the cost.

Among Alfred’s small band of weary survivors is Matthew, a novice monk who must learn to fight like a warrior if he, along with his brother and fellow Saxons, are to have any chance of defeating the fearsome Vikings.

As an impending battle looms, Matthew is charged with a vital role that means he must face danger and betrayal and undertake a hazardous journey which will test both him and his faith to the limit.

This red bloodied tale is not just about battles and gory hand to hand fighting, it is about victory against the odds as the Saxons fight not just for their freedom and their religion, but for their very existence.

‘I have read many historical fiction books set during the reign of Alfred the Great, but as of yet, I have never read one which depicted the defeat of Ubba and his Viking fleet so well. The battle is brought vividly to life by Bishop’s intuitive understanding of battle strategy and his dramatic sweeping narrative. The battle is bloody, ruthless, and brilliantly executed’

‘Fans of historical fiction and the TV series ‘Vikings’ will absolutely love Blood and Destiny.’

‘Historically fascinating you are instantly transformed into a world of war and ancestry.’

AVAILABLE FROM ALL GOOD BOOKSHOPS AND ONLINE – PRICE £8.99.