GHOST WRITER – THE HAND THAT GUIDES THE PEN 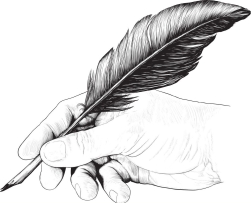 Writing without a reader is like talking to yourself. What you say may make perfect sense but no-one will hear you – or, even if they do, they’ll probably think you’re crazy!!!!

My debut novel – Blood & Destiny – started out as a short story about a ghost which I intended to submit to a literary competition. It was not a genre I had ever attempted before but I had a plot in mind which started out with the remains of a young Anglo Saxon boy being disturbed by archaeologists who were excavating his grave, curious to know why he had been buried in such a remote and lonely place. That is, in essence, still the basis of the prelude to Blood & Destiny, except that it rapidly became apparent that the ghost of the boy had his own tale to tell. He seemed to take over the story, pushing me into all sorts of places I had not intended to go and inducing all manner of twists and turns along the way. The upside of this was that pretty soon the whole story came gushing out like a … well, like all good stories should.

The strange thing was that when I eventually gave my ghost a name (actually, I gave him two names but you’ll have to read the book to find out why) he seemed to come to life and I realised that I was no longer writing a short ghost story, I was writing a novel.

When I’d finished it, I sent a draft off to several publishers, all of whom were very complimentary but they either rejected it as being ‘not for their market’ or suggested so many revisions that I began to wonder who was actually writing it. That’s not to say that their suggestions were unwelcome; in fact I took on board quite a few of them but, in the end, I opted to tell my story (or rather Matthew’s story) my way – in the way that it had come to me.

One of the publishers made a very valid point in saying that the voice at the beginning of the story (in the Prelude) seems older than the text suggests. When I looked at this I realised it was true. I also realised why – it was because Matthew’s life did not end where my story ended, implying that he yet had even more to tell me. With that in mind, I wrote Book Two (The Warrior with the Pierced Heart) and Book Three (The Final Reckoning) which were intended to complete the series.  However, so many people asked what became of various characters that I then wrote Book Four (Bloodlines) and Book Five (The Prodigal Son – to be released in 2023).

I’d like to think that Matthew’s ‘ghost’ guided my pen throughout the process (or should I say told me which keys to press on my keyboard?). Certainly it felt that way at times. So, is it possible that this really is Matthew telling his story through me – and if so, does that mean it could actually be true?

Personally, I think not. To accept that would be to deny the hours of research, drafting, editing and revision that are all part of writing a novel. But I think it is just one of those stories that needed to be told to the extent that several reviewers have described it as ‘a damn good tale’. If so, I regard myself as being very fortunate that it was given to me to tell it.